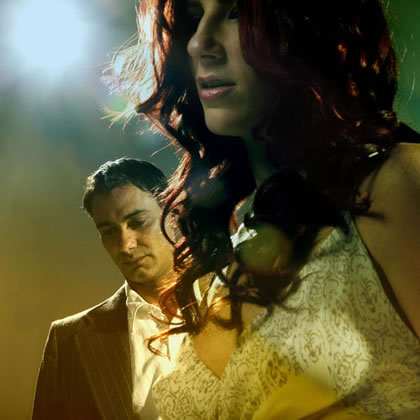 Loving this new release from Bitter:Sweet and looking forward to their sophomore effort called, “Drama”. It’s easy to hear why so many music supervisors place Bitter:Sweet music in to TV show’s such as Grey’s Anatomy, Moonlight, and Lipstick Jungle to name a few.

Bitter:Sweet is an electronic/trip-hop duo with jazz-like qualities from Los Angeles. The band is comprised of Shana Halligan, who provides vocals and lyrics and composes the songs, and Kiran Shahani, who produces and composes the songs. They are often compared to, or appeal to, fans of Zero 7, Morcheeba, BjÃ¶rk, Portishead, Everything But the Girl, and Serge Gainsbourg. Recently, they have been listed on the Top 10 on the iTunes Store electronic chart and have been placed on radio station KCRW’s Top 5 Most Requested CD for the week of March 20, 2006 [1]. Additionally, they have been featured on the soundtrack of The Devil Wears Prada, in Episode 2 (“I Am a Tree”) of Season 3 of Grey’s Anatomy, in the movies Because I Said So and Shoot ‘Em Up, in a Zune advertisement, and also placed on MSN’s list for “Ones to Watch” [2].

The duo was formed when Halligan answered an ad listed on Craig’s List for a singer posted by Shahani, who had previously founded the Supreme Beings of Leisure. Their 11-track debut album, The Mating Game, was released April 4, 2006 under Quango Music Group and has been reviewed and recognized by several magazine publications, such as Urb and People [3] [4] The song was featured on a commercial for the winery, Korbel.

In summer of 2007, Bitter:Sweet released The Remix Game, featuring reworked versions of tracks from The Mating Game by reknown producers such as Thievery Corporation, Fort Knox Five, and Skeewiff. These tracks were previously available only on vinyl, or unreleased.