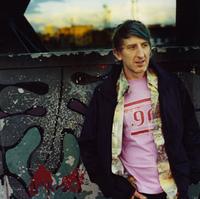 “Merz aka Conrad Lambert has a life as unorthodox as his music. He began his travels at 18, after his schooling in West Yorkshire, and has made friends in 48 countries. His parents live in Mongolia, his grandmother was born in Babylon (Long Island that is). He’s currently settled in Bristol, where, distanced from the industry, he writes his curious music.” NME

“A maverick with three decades of cultural exploring behind him, Conrad Lambert is a post-pop auteur with a distinctive croaky voice and oodles of left-field ideas.” UNCUT

“In the airbrushed teen market, he might be deemed no oil painting, but to the trained eye he resembles Vincint Van Gogh. Lend him your ears.” EVENING STANDARD.

3 “merz sounds like nobody else in the world and the world would be alright if it listened to nobody else. We absolutely love him.” Coldplay

5 “what makes merz great are his songs – earnest, poetic pleas that impact a sense of hope and well being” Flipside

6 “merz’s debut should be cherished….it will leave you bewitched” cd of the week, The Guardian.

Myspace dossing about can be found here: www.myspace.com/merzuk

Merz – Postcard From a Dark Star