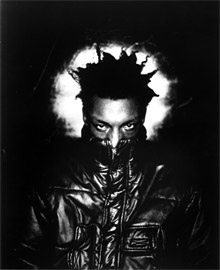 More of up straight up mellow rock track from Tricky’s latest effort titled, “Knowle West Boy”. I have had this track looping for about an hour now… 🙂

Adrian Thaws (born January 27, 1968), better known as Tricky, is an English rapper and musician important in the trip-hop and british music scene (despite loathing the “trip-hop” tag).

He is noted for an asthmatic whispering lyrical style that is half-rapped, half-sung. As a producer and a musician he is known for having an aversion to perfection preferring to build up a dark, rich and layered sound. Culturally, Tricky bridges white and black Britain particularly in his fusion of rock and hip-hop, high art and pop culture. He drew his influences from rap Public Enemy to post-punk (he covered a Siouxsie and the Banshees’s song Tattoo).

One Reply to “Tricky – Far Away”