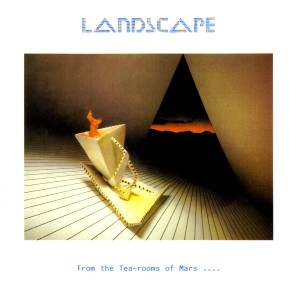 Landscape’s highest topping tune is hands down “Einstein A Go Go”.  Release in 1981 and reached the number #5 spot on UK singles chart.  You can still hear the influence of 70’s toward the middle of this track, but it’s firmly in the synthpop genre.  This track is taken from their 1981 full length From the Tea-rooms of Mars ….

Hailing from Belgium, Absolute Body Control is a synthpop duo of Dirk Ivens and Eric Van Wonterghem.  This track was taken from their 1983 full length of the same name. It’s synthpop with a bit of DIY punk feel to it — think Soft Cell-esque.  I fell for that lead synth in the chorus that rides behind the lyrics “What’s the name of the movie, figures are so groovy”.

Dirk Ivens is still producing music to this day, a recent examples are:
A cover of “Who Do You Love”

And his latest release under side-project Sonar with a new album titled,  Sonar ?– Shadow Dancers. Here is a cut from the album, which is very Industrial.

This one was a rather new find since I never heard it till about a month ago, got to love the internet.  He is rather well known in Australian, not so much here in the States — at least in regard to this particular track. This track is lifted from his 1983 album, Positive Action.  It’s a synthpop track that sounds somewhat like The Cars.

Vocals at times sounds like Tears for Fears, and the music is in a transitional period of 80’s synthpop to dance sounds of 90’s house.  Makes sense when you consider the date of the release: 1989.

I originally had this as a cassette single, and was quite proud to own it since it came and went quickly from stores shelves.  Mostly because the record stores at the time only had a one or two copies on hand.

Hubert Kah is a German synthpop band, led by Hubert Kemmler.
Started as a trio, consisting of Hubert Kemmler (vocals, keyboards), Markus Löhr (guitars, keyboards) and Klaus Hirschburger (bass) at the time of the New German Wave 1982 commercial success with the singles “Rosemarie”, “Sternenhimmel” and “Einmal nur mit Erika… (dieser Welt entfliehn)”, and with the albums “Meine Höhepunkte” and “Ich komme”. During this time, Kemmler caused quite a stir by his TV appearances, wearing a nightdress or straitjacket.

As of 1984, the band began working with producer Michael Cretu. After a german album “Goldene Zeiten” (1984), the band recorded the english language albums “Tensongs” (1986) and “Sound of My Heart” (1989), which were partly successful internationally.

Hubert Kemmler fell ill in the later 1980s with depression and withdrew from music completely. After his recovery he appeared with a new version of the band in 1996 with the self-titled Hubert Kah and the singles “C’est La Vie” and “Sailing”. The production with classic elements was not commercially as successful as hoped for by Kemmler. In 1998, a new single “Love Chain” and a Best Of CD were released. Kemmler then became ill again and had to undergo medical treatment.

In 2005, Kemmler began his second comeback with the album “Seelentaucher”. The first single was called “No Rain”. The album featured a mixture of english and german language tracks

Released in 1979, M was the moniker of English musician Robin Scott.

The song was initially recorded in R&B and funk styles before a friend of Scott suggested using synthesizers. He describes the genesis of “Pop Muzik” this way:

I was looking to make a fusion of various styles which somehow would summarise the last 25 years of pop music. It was a deliberate point I was trying to make. Whereas rock and roll had created a generation gap, disco was bringing people together on an enormous scale. That’s why I really wanted to make a simple, bland statement, which was, ‘All we’re talking about basically (is) pop music.’ [Taken from wiki]

I personally really didn’t come across this track until the remix starting to hit some of the clubs back in 1989.   I had heard it a few times on KROQ back in the day, but it wasn’t till I heard it blasting on a huge soundsystem did I finally realize I needed this 12″.