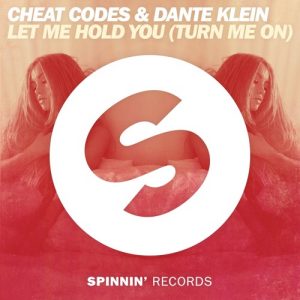 After Cheat Codes’ most recent collaborations ‘Sex’ with Kris Kross Amsterdam (190 million-plus Spotify plays and 25 million YouTube views and counting plus currently #9 in the UK chart) and ‘Can’t Fight It’ with Quintino, the LA based power trio are back with their newest collaboration. This time teaming up on their new summer jam ‘Let Me Hold You (Turn Me On)’ with the Dutch DJ/producer phenom Dante Klein. The young DJ/producer only last year bursted into the scene with his track ‘Ertesuppe’ which received support by heavyweights such as Pete Tong, Avicii and The Magician.

Cheat Codes and Dante Klein’s new track ‘Let Me Hold You (Turn Me On)’ is a rework of Kevin Lyttle’s hit ‘Turn Me On’. “Everybody loves the classic Kevin Lyttle song ‘Turn Me On’, so we were stoked to re-do it and put our own little twist on it. The melodies are timeless so we just wanted to modernize the lyrics and rhythms a bit.”, explains Cheat Codes.

The track has been secretly gaining global traction on Spotify as an ID track (with 3.6 million Spotify plays( and was revealed earlier this week on Billboard where also the video premiere of the accompanying video took place. “I am so excited that this collab with Cheat Codes is finally seeing the light of day. We had such a great time making it and can’t wait to play it for everyone this summer.”, tells Dante Klein.